The applicability of the amendments to Indian Arbitration & Conciliation Act, 1996 (“Act”) have been the bone of contention in several cases. Section 261 of the Arbitration & Conciliation (Amendment) Act 2015 (“Amendment Act”) clarified that the amendment will be prospectively applicable. However, the Madras2 and Calcutta High Courts3 have previously held that the prospective applicability of the Amendment Act would be limited to ‘arbitral proceedings’ and not to ‘court proceedings’. The Bombay High Court4 took a slightly different view: wherein it was held that “it makes no difference if the application under Section 34 filed by the award-debtor was prior to 23rd October, 2015” (discussed later).

A final award was made in favour of the Respondents on 13 October 2015, which was challenged under Section 34 of the Act on 4 January 2016. The Single Judge issued notice on Respondents challenge petition under Section 34 of the Act, subject to deposit of a sum of Rs. 2.70 crores. Subsequently, an appeal was filed against Single Judge’s order before the Division Bench.

The primary contention was the applicability of the Amendment Act and whether merely filing a challenge under Section 34 of the Act would lead to an automatic stay on the enforcement proceedings.

Arguments by the Appellant

The Appellant contended that the petitions under Section 34 of the Act would be governed by the un-amended provisions of, inter alia, Sections 34 and 36, therefore, entitled to the right of an automatic stay on the filing of the petitions under Section 34 of the said Act. The basic premise of the Appellant for adopting a prospective interpretation of Section 26 of the Amendment Act was that the amendment tends to take away vested rights (substantive rights) of the party challenging the award, to have an automatic stay on the award.

Arguments by the Respondents

The Respondents argued that the amended provisions would apply to court proceedings and, therefore, there would be no question of any automatic stay and that the order made by the Single Judge was within his powers. The Respondents relied on the case of Thyssen Stahlunion Gmbh v. Steel Authority of India Limited7 (“Thyssen”) to interpret the difference between “to arbitral proceedings” and “in relation to arbitral proceedings” in Section 26, as the latter referring to not only proceedings pending before the court but also proceedings emanating from or related to such arbitral proceedings like court proceedings etc. related to the arbitration. It was also argued that the amendment leading to disentitlement of having an automatic stay subsequent to a challenge of an award, does not divest a party’s right to challenge, rather it only introduces minor changes to such an interim relief, which is not a vested or accrued substantive right.

The Court referred to the Thyssen judgment where the Supreme Court had observed that the right to enforce an award “when arbitral proceedings commenced under the old Act under that very Act was certainly an accrued right” and, “there is no necessity that legal proceedings must be pending when the new Act comes into force.” The Court construed this as equivalent to arbitral proceedings commenced prior to 23 October 2015, and an award being made prior to 23 October 2015 but challenge being made post-amendments, which is the present case. 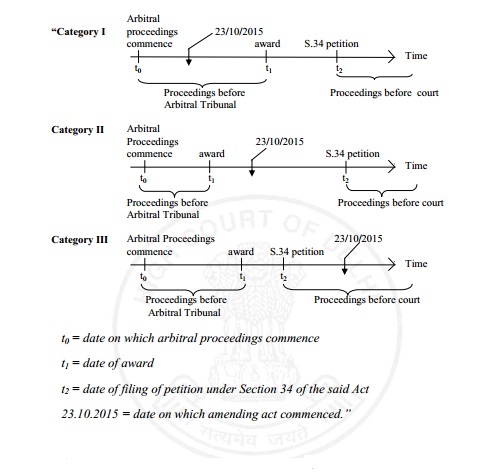 Based on this representation, the Court concluded that if the first part of Section 26 applies only to arbitral proceedings in the sense of proceedings before arbitral tribunals and not to court proceedings, then, it is obvious that Section 26 is silent on second and third categories of cases. Thus, no contrary intention of retrospectivity could be inferred upon a reading of Section 26 of the Amending Act.

The Court, expanded the scope of the right to enforce an award as an accrued right to be inclusive of the negative right of the award-debtor to not have the award enforced. Thus, on considering that the right to have an automatic stay on the enforcement of the award has ceased, pursuant to the amendments, the Court concluded that these amendments are to be treated as prospective in operation.

There is a risk of extension of ‘automatic stay principle’ which was prevalent in the pre-arbitration regime, debated and purposely omitted in the amendments to the Act. This judgment, if followed may defeat the intention of the amended Section 36 of the Act.

The decision of the Bombay High Court has been appealed and pending adjudication before Supreme Court of India. Hopefully, the Supreme Court will settle the position on applicability of the Amendment Act and bring the divergent views of various High Courts to an end.

1 Section 26 of the Amendment Act provides that: “Nothing contained in this Act shall apply to the arbitral proceedings commenced, in accordance with the provisions of section 21 of the principal Act, before the commencement of this Act unless the parties otherwise agree but this Act shall apply in relation to arbitral proceedings commenced on or after the date of commencement of this Act.”

4 Rendezvous Sports World v. the Board of Control for Cricket in India, 2016 SCC Online Bom 255.

11 Rendezvous Sports World v. the Board of Control for Cricket in India, 2016 SCC Online Bom 255