In a recent ruling1, the Tax Court of Canada (“Court”) ruled that one of the main purposes for the separate legal existence of a company (“Taxpayer”) was to obtain a reduction of tax payable in Canada. As a consequence, the Court denied the company the small company deduction available under Section 125 of the Canadian Income Tax Act (“CITA”).

Kal Tire is a global tire business founded by the late Tom Foord and carried on through a number of companies and their subsidiaries, all of which were ultimately owned by the Kal Tire Partnership. Mr. Foord’s interest in the Kal Tire Partnership was held by a company known as Kal Tire Ltd. (“KT Limited”) which was a wholly owned subsidiary of Kal Tire Holdings Limited (“KT Holdings”). Mr. Foord controlled KT Holdings through a class of voting shares, while the common shares of KT Holdings were held by a trust known as the Kal Management Trust (“KT Trust”). Mr. Foord was the trustee of the KT Trust and his five children were the beneficiaries This structure is depicted in the diagram below. 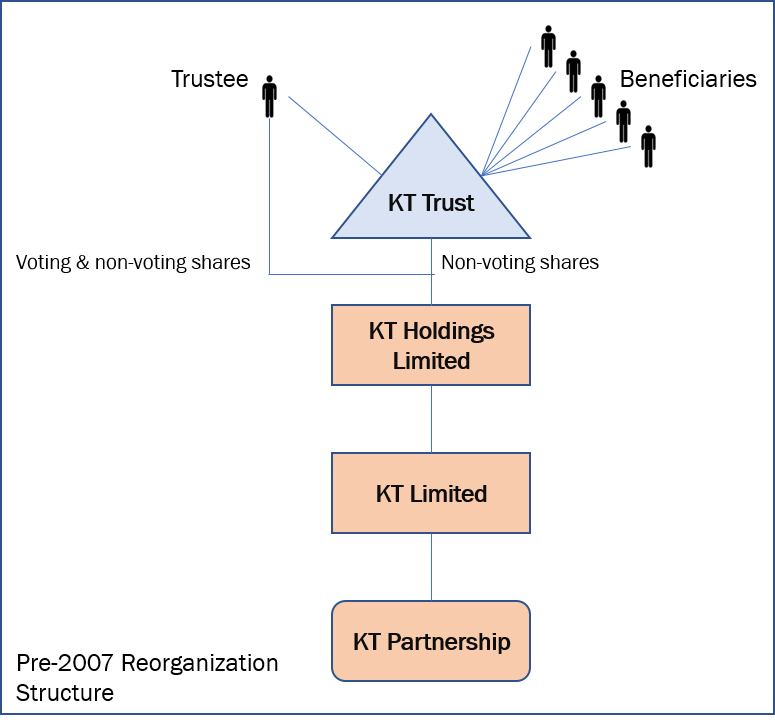 In 2007, KT Holdings underwent a significant reorganization (the “2007 Reorganization”) pursuant to which the voting and non-voting shares of KT Holdings held by Mr. Foord and the KT Trust were transferred to holding companies incorporated by each of the Foord children (“Hold Cos”) and the interests of four of the Foord children in their Hold Cos were frozen in favour of four new family trusts. The post-2007 Reorganization structure is depicted in the diagram below. 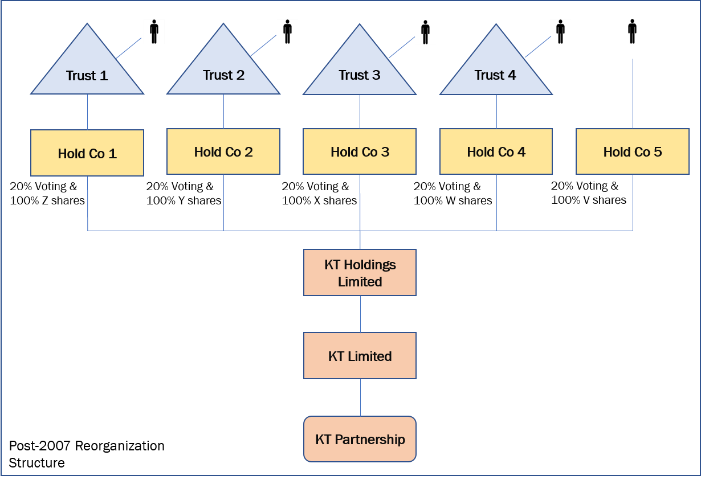 The Canadian Tax Authorities (“Revenue”) argued that the 2007 Reorganization was designed in a way that allowed the Hold Cos to claim the small business deduction in respect of active business income that flowed to them from KT Holdings. Under section 125 of the CITA, Canadian-controlled private corporations are taxed at a lower rate on their first CAD 500,000 of active business income.

However, when two corporations are associated with each other by virtue of their common association with a third company (in this case KT Holdings), the third company may make an election under subsection 256(2) of the CITA to not be associated with either of the other companies for the purpose of section 125. Following the 2017 Reorganization, KT Holdings made that election and as a result each Hold Co was able to maintain its own $500,000 business limit.4The 2007 Reorganization also involved a series of dividend and loan transactions. KT Limited would withdraw funds from the KT Partnership and use those funds to pay dividends to KT Holdings. KT Holdings would then use those funds to pay dividends to each Hold Co. The Hold Cos would then take the funds received and lend them back to KT Holdings, which lent them back to KT Limited, which recontributed the funds to the partnership. The amount of dividends paid and the interest rate on the loans were determined to ensure that, once all of the transactions had occurred, each Hold Co would earn CAD 500,000 of interest income each year.

The Canadian tax authorities (“Revenue”) denied the Taxpayer the small business deduction by relying on the specific anti-avoidance rule ("SAAR") in subsection 256(2.1) of the CITA which provides that if one of the main reasons for the separate existence of two or more corporations may reasonably be considered to be the reduction of taxes that would be otherwise payable, the two corporations shall be deemed to be associated with each other.

The Taxpayer appealed to Court. Before the Court, the Revenue also made an additional argument that the General Anti-Avoidance Rule (“GAAR”) would also be applicable.

Whether one of the main reasons for the separate existence of the Taxpayer was to reduce the amount of tax that was otherwise payable under the CITA?

The Court found that If the Taxpayer did not exist, this tax reduction would not have occurred and instead the interest income earned by the Taxpayer would have been earned by the trusts or their beneficiaries, neither of whom was entitled to claim the small business deduction. Thus, the Court found that the first condition of section 256(2.1) i.e., a reduction of taxes arising out of separate existence, had been met.

Under section 256(2.1), the burden lies on the taxpayer to prove that reducing tax was not one of the main reasons for its separate existence. The Court held that the Taxpayer had failed to discharge its burden for the following reasons:

One of the prerequisites for the application of India’s general anti-avoidance rule (“GAAR”) to an arrangement is that that the main purpose of the arrangement was to obtain a tax benefit. To that extent, the Canadian law is wider in its ambit as it provides that even if one of the main reasons was to obtain a tax benefit, GAAR would be applicable.

However, this ruling emphasizes the importance of parties to be able to demonstrate the commercial and non-tax reasons that underlie an arrangement, and to be able to corroborate these reasons with direct evidence.

It is currently common practice for taxpayers to commission structuring memoranda and step-plans from accountants and advisors. These documents usually outline the rationale for a restructuring, including the potential tax benefits. This way it is possible to justify the various reasons why a structuring was done. This ruling is a reminder that laying undue emphasis on the tax benefits of a restructuring may only serve to provide tax authorities with a foothold to challenge a structure.

Parties (and their advisors) implementing a structure or undertaking a restructuring should bear these aspects in mind. Official records, such agenda, notices and minutes should emphasize non-tax and commercial reasons. Other records, such as email correspondence, text messages, advisory memoranda and structure notes should support these reasons.

2 A corporation's taxable capital is, in general, the total of its shareholder's equity, surpluses and reserves, and loans and advances to the corporation, less certain types of investments in other corporations.

3 The grind completely eliminates the business limit once the taxable capital employed in Canada exceeds CAD 15,000,000.