Over the last year, India has taken tangible steps in reforming its judicial setup to bring about efficiency and speed in disposal of commercial matters. The constitution of commercial courts1, reforms in the arbitration regime2 and introduction of the Insolvency and Bankruptcy Code, 2016 (“Bankruptcy Code”) offer a completely new mechanism for resolution of commercial matters. The government has now constituted the much awaited National Company Law Tribunal (“NCLT”) which is expected to consolidate multiple forums that currently exist for resolving company law matters.

It’s been more than a decade since the passage of the Companies (Second Amendment) Act, 2002, which provided the legislative framework for constitution of the NCLT. However a constitutional challenge against constitution of NCLT delayed the process. The Hon’ble Supreme Court in Madras Bar Association vs Union of India3 finally upheld the constitutional validity of NCLT and the National Company Law Appellate Tribunal (“NCLAT”) while holding that the qualifications of technical members and the composition of the selection committee of such members as prescribed in the statute had defects and required correction. In another judgment in Madras Bar Association vs Union of India4 the Hon’ble Supreme Court found that defects as found in Companies (Second Amendment) Act, 2002 also existed in the provisions of the Companies Act, 2013.

After much debate on the issues prevalent in the constitution of NCLT & NCLAT, it has finally seen the light of day. The government on June 1, 2016 issued notifications5 bringing into effect several key sections of the Companies Act, 2013 and constituting NCLT6 and NCLAT.

Currently, the NCLT will take over only from the Company Law Board. The notification brings into force Section 434(1)(a) of Companies Act, 2013 which mandates transfer of cases pending before the CLB to the NCLT and requires the NCLT to dispose of such matters in accordance with the provisions of the Companies Act, 2013.

Section 421 of the Companies Act, 2013 provides that an appeal may be filed against an order of NCLT (not passed with the consent of the parties) within 45 days before the NCLAT.

The table below reflects various types of matters which are going to be or are proposed to be dealt with by the NCLT: 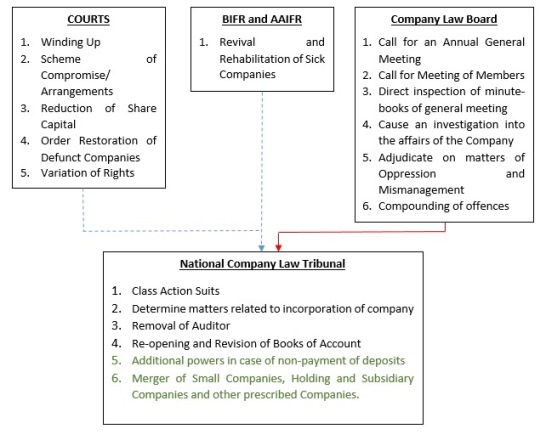 The provisions granting these powers have not been notified yet.

IMPACT OF INTRODUCTION OF NCLT:

Dearth of such a remedy was felt particularly in the wake of the Satyam Scam, where the public shareholders in India had no remedy as opposed to the bondholders in the United States. With the notification of Section 245 of the Companies Act, 2013, members and depositors in a company have the additional remedy in form of class action proceedings which could be initiated before the NCLT. The recent surge in shareholder activism in India, makes the introduction of class actions remedy highly interesting. It is a critical tool now in the hand of minority shareholders who may question the decisions made by the management and the intent thereof.

The constitution of NCLT marks another seminal shift in the Indian judicial landscape and clearly demonstrates that the judicial system is turning for the better. The CLB stands scrapped and the matters will now be dealt with by the NCLT. Further, the notification of the provisions of Bankrupcy Code is imminent and it is expected that upon such notification NCLT would take over the corporate insolvency matter from courts. Thus, a complete overhaul of the system is taking place. This is further demonstrated by the constitution of the first commercial courts in the country. Commercial courts have been set up in Gujrat and the High Courts of Delhi, Mumbai and Himachal Pradesh have also constituted its commercial divisions. However, introduction of any new reforms brings with it its own set of challenges.The NCLAT may be overburdened with appeals. Further with statutory second appeal on any question of law to Supreme Court being available under Section 423 of the Companies Act, 2013, a large number of cases may be delayed on account of pendency of appeal before the overburdened Supreme Court.

1 Please refer to our Hotline: INTRODUCTION OF COMMERCIAL COURTS: END OF ENDLESS LITIGATION!

2  Please refer to our Hotline: ARBITRATION REFORMS IN INDIA: END OF THE ENDLESS SAGA?

AIFs due for closure struggle to sell holdings in startup firms
August 11,2022