Recently, the Mumbai bench of the Authority for Advance Rulings (“AAR”) passed an order rejecting capital gains tax benefit under Article 13(4) of the India – Mauritius Double Taxation Avoidance Agreement (“India – Mauritius DTAA”) to a Mauritian entity, i.e. Bid Services Division (Mauritius) Limited (“BSDM / Applicant”) - part of a global consortium on sale of shares of an Indian joint venture (JV) namely, Mumbai International Airport Limited (“MIAL”) for development of the Mumbai airport. Treaty relief was denied on the basis that BSDM was a mere conduit / shell entity and hence was not the beneficial owner of the shares transferred.

The Applicant is a wholly owned subsidiary of Bid Services Division (Proprietary) Limited, a company incorporated in South Africa (“BSDPL”), which in turn is a wholly owned subsidiary of another South African company, namely Bidvest Group Limited (“Bidvest”) – together referred to as the (“Bidvest Group”). The Applicant holds a Category 1 Global Business License (“GBL 1”) and a valid Tax Residency Certificate (“TRC”) issued by the relevant authorities in Mauritius. Further, the Applicant files its corporate tax returns in Mauritius, conducts board meetings in Mauritius and hence the effective control and management of the Applicant is situated outside India, i.e. in Mauritius. Moreover, the Applicant does not have any permanent establishment / business connection in India.

The Airports Authority of India (“AAI”), which held 26% of the shares in MIAL, called for a bid for the remaining 74% for the purposes of undertaking development, operation and maintenance activities at the Chhatrapati Shivaji International Airport in Mumbai (“Project”). Among the bids submitted, the AAI selected the bid submitted by the GVK – SA consortium (“Consortium”). The Applicant was one of the entities in the Consortium which invested in MIAL. The Applicant, being one of the entities of Consortium, subscribed to 27% of the shares of MIAL in a phased manner between 2006 and 2010. In 2011, the Applicant sold 13.5% of its shareholding in MIAL to GVK Airport Holdings Private Limited (“GAHPL”), an already existing shareholder of MIAL from within the Consortium. A diagrammatic representation of the structure and transaction is as below: 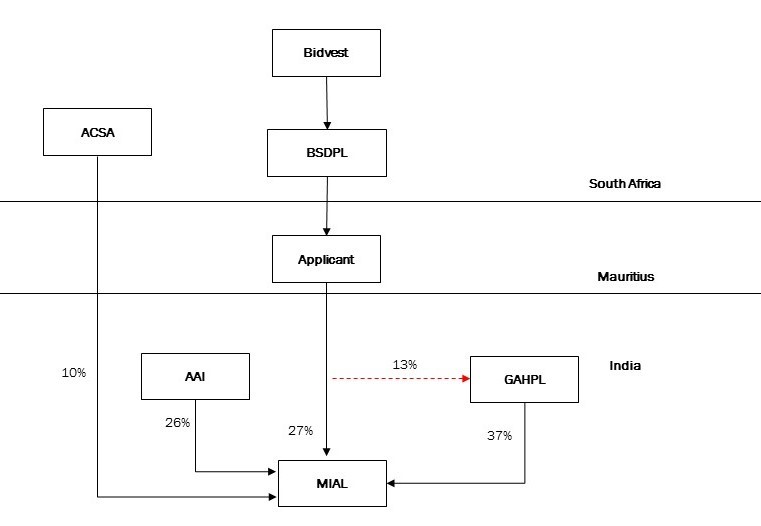 The AAR ruled that the Applicant was not entitled to avail capital gains tax benefit under Article 13(4) of the India – Mauritius DTAA. The primary reason for disallowing treaty benefit was the interposing of the Applicant in Mauritius at the end of the bidding process, without any economic and commercial rationale. Additionally, the AAR held that the Mauritius entity was a shell / conduit entity with no assets, employees, office space. Further, based on the nature of the Project, there was no commercial reason to set up the SPV in Mauritius, given that it earned no reputation as a financial hub or a seat of civil aviation experts. Regarding the argument of the Applicant that even if the transaction was designed only to obtain tax benefit, the same cannot be denied in the absence of an LOB clause, the AAR held that it has been recognized in Vodafone 11 that if it is established that a Mauritian company is interposed as a device, it is open for the tax department to discard the device and take into account the real transaction, even in the absence of an LOB. Considering that it anyway denied benefits under the India – Mauritius DTAA to the Applicant on the basis that it was not the beneficial owner of the shares transferred, the AAR did not consider it important to discuss the other urgings of the Revenue, i.e. the applicability of section 93, non-supply of certain documents by the Applicant and the valuation of the shares of MIAL etc.

This ruling has come as a reminder that even for the grandfathered investments (investments made prior to April 1, 2017) treaty relief under the India – Mauritius DTAA may not be allowed on the mere production of the TRC, and that a case by case analysis may be needed. While this seems to be the recent judicial trend, the approach appears to be erroneous. Further, this ruling seems to have particularly erred in several aspects, as discussed below.

It seems that the primary reason for disallowing treaty benefit in the present case was the interposing of the Applicant in Mauritius at the end of the bidding process. Firstly, as is clear from the facts, the Applicant acquired its total shareholding in MIAL over a period of 7 years. Secondly, the ‘timing test’, for the purposes of determining beneficial ownership requires looking at the period of time for which the shares were held prior to transfer, and not the timing of the investment itself. In this case, the Applicant held the shares for 5.5 years prior to the Transfer. Reliance in this regard may be placed on the Bombay High Court’s ruling in JSH Mauritius Limited12 where the key factor on the basis of which treaty relief was allowed was that the shares were held for 13 years prior to transfer. Thirdly, it is very common for SPVs to be set up immediately prior to investment, primarily because the SPV is set up for that purpose alone. Hence, for all these reasons, the disallowing of treaty relief on the basis that the Applicant was interposed immediately prior to investment is abhorrent.

Regarding the question on ‘substance’, the ruling has ignored aspects such as the Applicant having valid residency documents such as the GBL and TRC, it having its effective control and management in Mauritius on the basis that it filed its corporate tax returns and conducted board meetings in Mauritius. Instead the ruling has concluded that the Applicant had no substance on the basis it had no employees, assets or office space. In this regard, it shall be noted that the question of ‘substance’ should be evaluated from the perspective of the purpose of the entity. In the present case, the Applicant was an investment holding company, which typically does not require employees, assets or office spaces. The conduct of the entity for the entire holding period has not been considered and the mere fact that the Applicant was interposed prior to it making the investment has been considered as the primary basis to deny treaty relief. In fact, capital gains arises at the time of sale of the shares of the Indian company and the mere fact that the Applicant has been considered by its parent to invest into MIAL, should not render the entire holding period by the Applicant, including decision making during this period as well as for the sale of shares, redundant. While relying on the Vodafone13 ruling, the Revenue has however not considered the revalidation of holding company structures especially considering the period of time for which the shares are held by such holding companies. Further, the conclusion that there was no commercial rationale for setting up the Applicant in Mauritius on the basis that Mauritius is not a financial hub or a seat of civil aviation experts is also subject to criticism. The commercial reasons for choosing Mauritius, as substantiated by the Applicant, and as is common business practice among global conglomerates, included ring fencing of assets, ease of doing business, access of Asian markets etc. It may not be required for an investment holding company to be necessarily set up in a financial hub or in a jurisdiction which has business advantage for the ultimate investee company.

Lastly, in Seedworks Holdings14, the AAR had indicated that the denial of treaty benefits should be done sparingly and only in exceptional scenarios where the fact of tax avoidance is clear. In this case, there was nothing substantial which indicated that the transaction was a device to avoid tax and hence, the denial of treaty relief in this case, may not be received well by the international business community.