The term TGIF, couldn’t have been given a better description than what the Indian government announced on Friday September 14, 2012. The Cabinet Committee of Economic Affairs (“Cabinet”) approved a series of bold reforms permitting and/or increasing foreign investment in the areas of multi brand retail trading, aviation, broadcasting and power trading exchanges subject to certain conditions. It also pushed forward the disinvestment program. As India navigates through political and economic gridlock these bold set of reforms in the current environment are a step in the right direction.

After much debate and deliberation, the Cabinet has approved reforms relating to foreign direct investment (“FDI”) in the certain sectors as follows:

Below is a more comprehensive analysis of the reforms.

The country is in need of investment in infrastructure (aviation, power trading exchanges), retail and allied sectors. The Governments’ decision to open up foreign investment in certain sectors will give stimulus to the respective industries. Further, the reforms in the long run will have a mass multiplier effect in improving levels of employment and infrastructure in the country.

Having said the above, it is important to note that the above reforms have only been approved by the Cabinet. In order for these to form part of the FDI policy, the same will have to be notified in form of press note/ circulars.

Nishith Desai Associates is pleased to present a detailed research paper “Destination India - Welcome Retail” covering in-depth legal, tax and regulatory analysis alongwith industry insight on the Indian retail sector. We will be happy to have your views / comments on our research paper. Please read the disclaimer carefully.

Kartik Maheshwari, Ruchi Biyani, Khushboo Baxi and Vivek Kathpalia
You can direct your queries or comments to the authors

India entered into the World Trade Organisation’s General Agreement on Trade in Services (“GATS”), in January 1995 pursuant to the Uruguay Round negotiations. One of the commitments to the GATS includes wholesale and retailing services and therefore India was under an obligation to open up the retail trade sector to foreign investment. The retail sector in India is considered to be an economic and politically sensitive sector especially since it impacts a large number of the population comprising farmers, small traders and the economies that surround them. The Government has therefore been liberalizing its FDI policy in retail trading in a phased manner as reflected in the diagram below: 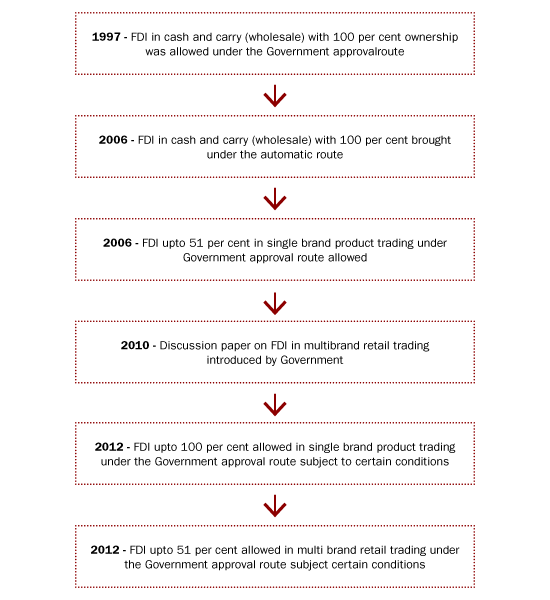 The press release of the government lists out the following conditions with respect to FDI in this sector:

FDI upto 100% is permitted in Single-Brand Product Retail Trading under the government route subject to fulfillment of certain riders as introduced in January 2012. For more details please refer to our hotline on “100% Foreign Direct Investment in Single Brand Retail allowed!!!

In this regard, we understand that certain foreign investors had raised concerns with respect to compliance with these conditions. After much debate and deliberation, these conditions have now been diluted / modified as follows:

Given the grim state of affairs of the aviation sector, the Cabinet has allowed foreign airlines to make foreign investment in scheduled and non-scheduled air transport services upto 49 percent (cumulative under both FDI and FII investment route).

In addition to compliance of securities law regulations in case of investment in a listed scheduled operator, such investment would further be subject to the conditions that:

Implication: The aviation sector is one of the major economic drivers for prosperity, development and employment in a country. However, of late the sector is facing a debt crisis. In order to rejuvenate the sector, the Government recently increased the limit of external commercial borrowing in the aviation sector subject to certain conditions. The liberalization of foreign policy in scheduled and non-scheduled air transport services will further allow the players to rejig their affairs. It is important to note that the current reforms now allow strategic investors to enter Indian aviation sector as opposed to financial investors. Further, the strategic investor will require a 51% Indian partner and will have to be dependent on the same.

The Cabinet, vide a press release3 issued on September 14, 2012 has approved the long standing demand of the broadcasting industry to raise the limit of foreign investment in companies operating in the broadcasting sector from 49% to 74%.

The following changes are proposed to be brought into effect:

The Cabinet has permitted foreign investment upto 49 percent (FDI limit of 26 per cent and FII limit of 23 per cent of the paid-up capital], in power trading exchanges, in compliance with SEBI Regulations; Central Electricity Regulatory Commission (Power Market) Regulations, 2010; and other applicable laws/ regulations; security and other conditionalities.

2 Small industries mean industries which have a total investment in plant & machinery not exceeding USD 1 million. This valuation here refers to the value at the time of installation, without providing for depreciation. Further, if at any point in time, this valuation is exceeded, the industry shall not qualify as a `small industry` for this purpose.

4 Available at http://trai.gov.in/WriteReaddata/ConsultationPaper/Document/cpaper18sep07.pdf. Recommendations were, subsequently received from MIB and again, from TRAI (to MIB’s recommendations) in 2008 and 2010 respectively

TCS case may throw spotlight on job termination in IT industry
June 23,2022