Section 245R(2) of the Indian Income Tax Act, 1961 (‘ITA’) provides for situation wherein application filed before the Authority for Advance Ruling (“AAR”) may be rejected at the stage of admission. The matter of Microsoft Operations Pte. Ltd., Singapore (the “Applicant”), a wholly owned subsidiary of Microsoft Corporation US (“MS Co.”) is one such instance.

In the year 2006, Gracemac merged with MOL Corporation (“MOLC”); after which the Applicant entered into a fresh license agreement on similar terms with MOLC. 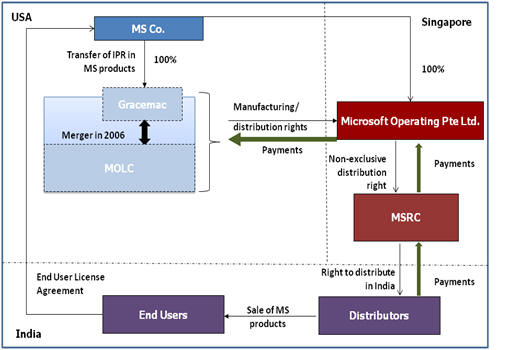 ADMISSIBLITY OF THE APPLICATION: CONTENTIONS BEFORE THE AAR

The primary contention of the Revenue was with respect to the non-maintainability of the present application, on grounds that the Applicant had an appeal pending before the Income Tax Appellate Tribunal, Delhi (“Tribunal”). The Revenue based its contention on Section 245-R(2) of ITA, whereby the AAR is granted wide discretion to accept an application, except in certain circumstances, which includes a situation where the question raised before the AAR is pending for adjudication before any tax authority or Tribunal and accordingly claimed that the aforesaid section clearly prevented the AAR from adjudicating on the merits of the application at hand.

It is important to note that for the assessment years 1999-2000 to 2005-06, the Tribunal had held, after analyzing inter-alia agreements (similar to those referred to in the present application) entered into by Gracemac with MS Co., Applicant and the end-users, that the license fee received was in the nature of royalty income and thus, liable to be taxed in India.

The AAR rejected the contentions of the Applicant and thereby the application made by the Applicant on the ground that the matter in question was ‘already pending’ before the Tribunal. The AAR noted that as a result of merger with MOLC, MOLC itself becomes the appellant in the pending appeals and that the obligation of the Applicant to withhold the tax at source cannot be decided de hors the issues raised concerning the tax liability of MOLC.

Further, the AAR noted that if the Tribunal and the AAR rule differently, it would give rise to an anomalous situation and having allowed the proceedings thus far, the Applicant cannot as a matter of right seek the ruling from the AAR. The AAR also referred to the ruling delivered in the case of Airports Authority of India, wherein the application was allowed even though it concerned tax withholding obligations and appeals against assessment orders were still pending. The AAR distinguished the facts of the Airports Authority case by pointing out that in that case the assessing officer had created uncertainty by departing from AAR’s earlier ruling on the same subject matter and further, the AAR was approached by the aggrieved applicant at the earliest opportunity. However, in the present case, the Applicant had taken its chances at the time of the assessment and the first appellate proceedings and thereafter approached the AAR. Thus, the applicant had no grounds to pursue the AAR to exercise its discretion and adjudicate upon the questions raised.

This ruling sends out a clear message that notwithstanding the discretion conferred on the AAR, it is not open to the AAR to ignore the legal bar created by the proviso to Section 245R(2)of the ITA. Further, it is evident that AAR restrains from exercising its discretionary powers to admit applications wherein the applicant has tried to make out its case at various levels and thereafter, on receiving an adverse order from all counters, approach the AAR. The sanctity of the process for advance ruling is required to be respected and strictly adhered to.

It may be recollected that as per various media reports in the recent past, tax authorities have alleged that Gracemac is liable to pay income tax on its gross royalty income earned out of licensing of software to Indian customers and had alleged that payments made for use of shrink wrap software are royalty income. Pertinently, the AAR did not discuss the case on merits and therefore, the question with respect to payments in lieu of software still remains to be decided by the Tribunal.

- Neha Sinha, Mansi Seth & Parul Jain
You can direct your queries or comments to the authors