Clarificatory amendment should be applied retroactively: Authority for Advance Ruling

Recently, the Authority for Advance Rulings (“AAR”) pronounced a ruling1 that clarificatory amendments brought about to the indirect transfer tax provisions under the Income-tax Act, 1961 (“ITA”) should be applied retroactively. The AAR ruled that the amendments that were brought about in the year 2015 viz. (i) the meaning of ‘substantial’; (ii) small shareholder exemption; and (iii) determination of how much capital gains will be attributable to India in case of the indirect transfer provisions, are clarificatory in nature and have to be applied retroactively to render the indirect transfer provisions which were inserted in the ITA in the year 2012 workable.

In December 2013, Applicant A, a company incorporated in New Jersey (“Buyer”) purchased the entire shareholding of DEF from the Sellers. This resulted in an indirect change in shareholding of PQR (“Transaction”). The diagrammatic representation of the structure and Transaction is as below. 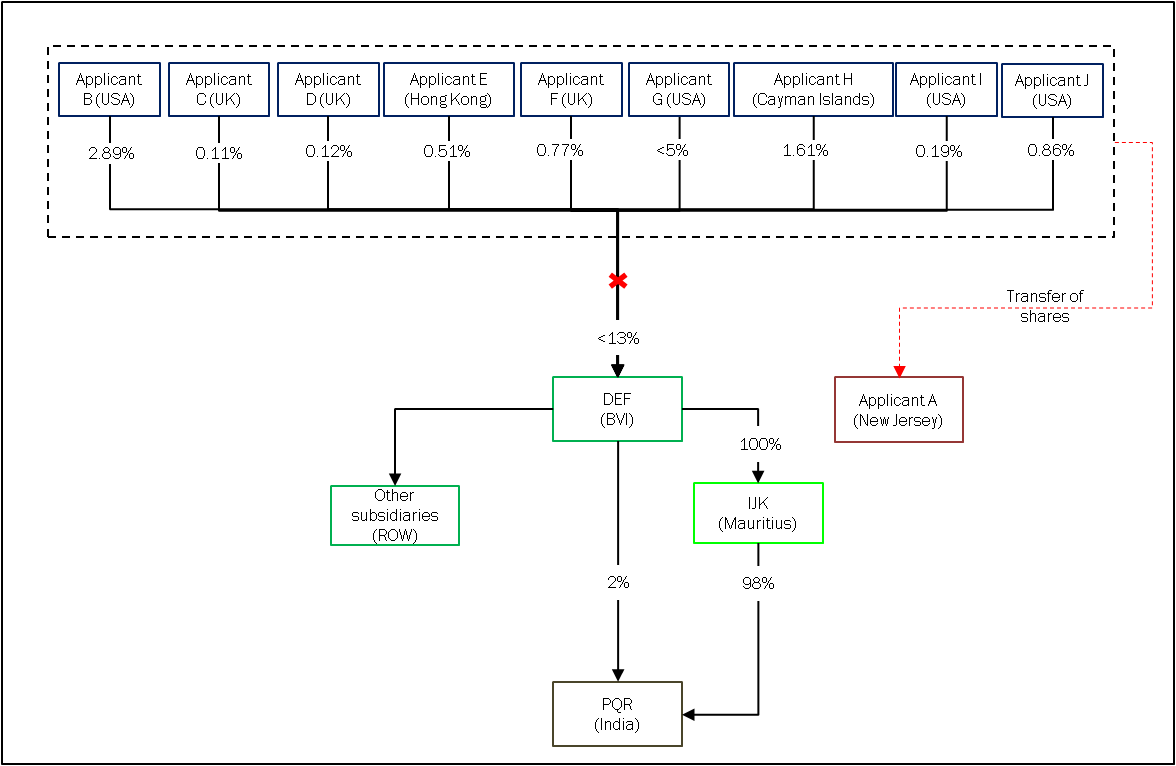 The Buyer and the Applicant Sellers (“Applicants”) approached the AAR to determine, inter alia:

In the aftermath of the Supreme Court’s decision in the landmark case of Vodafone BV International Holdings V. Union of India,2 the Government of India vide Finance Act, 2012 amended section 9(1)(i) of the ITAretrospectively by inserting Explanation 5 which provides that:

“For the removal of doubts, it is hereby clarified that an asset or a capital asset being any share or interest in a company or entity registered or incorporated outside India shall be deemed to be and shall always be deemed to have been situated in India, if the share or interest derives, directly or indirectly, its value substantially from the assets located in India.”

Explanation 6 to section 9(1)(i) provides that:

“For the purposes of this clause, it is hereby declared that—
the share or interest, referred to in Explanation 5, shall be deemed to derive its value substantially from the assets (whether tangible or intangible) located in India, if, on the specified date, the value of such assets—

Explanation 7(a) to section 9(1)(i) inter-alia provides that were the transferor along with its associated enterprise, has not held any voting power, share capital or interest in the foreign company whose share are being transferred in excess of 5% nor any right of management or control in such foreign company during the twelve months preceding the date of transfer, the income from transfer of shares of such foreign company for such transferors would not be taxable in India.

Further, Explanation 7(b) to section 9(1)(i) provides that where the foreign company holds other assets outside India besides the assets located in India, income only reasonably attributable to asset located in India would be taxable in India.

The AAR stated that the only germane issue is whether the clarificatory amendment i.e. Explanation 6 and Explanation7 inserted by FA 2015 to section 9(1)(i) of the ITA are retroactive or prospective in nature.

Accepting the argument of the Applicant that the clarificatory amendments brought about by the FA 2015 provide the necessary machinery provisions in the absence of which implementation of the indirect transfer provisions as set out in Explanation 6 and Explanation 7 to section 9(1)(i) should not be possible and accordingly should be applied with retrospective effect.

The AAR acknowledged that during 2012 to 2016, the word 'substantial' appearing in Explanation 5 was not defined under the ITA and it was a subject matter of scrutiny in number of cases. In this regard, the AAR relied on judicial precedents viz. Director of Income-tax (International) v. Copal Research Limited3, GEA Refrigeration Technologies GmBh4 and Banca Sella S.p.A.5, wherein it was uniformly held that ‘substantially’ appearing in Explanation 5 to section 9(1)(i) of the ITA mean less than 50%. The AAR held that this position was further clarified by introduction of Explanation 6 under the ITA which also provided for the 50% threshold to define what ‘substantially’ means.

The AAR also accepted the argument of the applicants that whenever there is any ambiguity in interpretation of law and to remove the said ambiguity, any amendment is proposed by the parliament, even if prospectively, then the same should be treated as remedial in nature, designed to eliminate unintended consequences which may cause hardship to taxpayers, the same should be constructed as retrospective in operation. In this regard the AAR took cognizance of the language in Explanation 6 to section 9(1)(i) which begins with “for the purposes of this clause it is hereby declared ...”. The AAR referring to the ‘declaratory statutes’ referred to in the ‘Principles of Statutory Interpretation’ by Justice G.P.Singh noted that a declaratory act may be defined as an act to remove doubts existing as to the common law, or meaning or effect of any statute. Such acts are usually held to be retrospective in nature. If a new act is ‘to explain’ an earlier act, it would be without object unless construed to be retrospective. It stated that it is well settled that if a statute is curative or merely declaratory of previous law, retrospective application is intended.

The AAR also held that Explanation 7 was inserted to address the genuine concerns of small shareholders and would also apply retrospectively to give meaning in true sense and to render indirect transfer provisions contained in Explanation 5 to section 9(1)(i) of the ITA workable.

Given that historically the indirect transfer provisions have been a source of concern for taxpayers, the AAR ruling is a welcome, especially for the transactions consummated prior to the amendments undertaken by FA 2015. It reiterates the importance of principles of statutory interpretations and highlights several important principles for a law to be considered as ‘declaratory’ in nature. The ruling makes an important point that for the amendments made in the year 2012 whereby the indirect transfer provisions were inserted to the ITA can be made workable only by the insertions made by the FA 2015 and hence retrospective applicability of the amendments is necessary.

In this context it would also be interesting to examine whether absent the clarificatory amendments can the indirect transfer provisions be still applicable? It is trite law6 that where the computation of a tax against income levied under the ITA is impossible to conduct, the charge of tax against such income too would fail. Therefore, without having the meaning of substantial can it be said that computation is not possible and hence the charge of tax would also automatically fail? In such a case, no transaction between the years 2012 and 2015 which resulted in an indirect transfer can be made subject to tax in India.

Interestingly, given that the AAR is barred under section 245R of the ITA to allow application where the question raised involves determination of fair market value of any property, the AAR while providing a favourable ruling on the principle has given liberty to the Revenue to verify the valuation adopted by the taxpayer in light of the Rules. The AAR has clarified that if subsequently it is found that the shares of DEF derive more than 50% value from assets located in India, the ruling will not apply and the Revenue would not be bound by such ruling.

6 CIT vs. B.C. Srinivasa Shetty, [1981] 128 ITR 294 (SC) - The Court in that case held that ‘goodwill’ cannot be described as an asset within the meaning of Section 45 and hence, any capital gain arising on the transfer of such goodwill cannot be subject to income tax under the head “capital gains.