Medical Device Round Up: Key Developments in 2019

In 2019, the Indian Government is stepping up to this challenge. By constituting a special vertical at the apex drug regulatory level, releasing the roadmap for medical devices and bringing a wide variety of medical devices within the regulatory ambit, it is clear that the medical devices industry can expect exciting times ahead.

WIDE CATEGORY OF MEDICAL DEVICES PLACED ON TRACK FOR REGULATION

The notification of the Additional Medical Devices marks the government’s strong push towards regulating the medical device sector as a whole. Currently, only 15 categories of medical devices are regulated under the D&C Act through the MDR 2017, which came into effect last year. Prior to the MDR 2017, regulated medical devices were governed by the provisions of the Drugs and Cosmetics Rules, 1945 (“D&C Rules”) – which was originally intended to regulate drugs and cosmetics.

One of the major implications of the notification of the Additional Medical Devices (once it comes into effect) would be the applicability of price control over all the products. Drugs and regulated medical devices are subject to some form of price control under the Drugs (Prices Control) Order, 2013 (“DPCO”), either by restricting importers and manufacturers of drugs/regulated medical devices from increasing the price of the product by more than 10% over the preceding twelve months, or having its ceiling price fixed as determined by the National Pharmaceutical Pricing Authority – the apex drug and regulated medical device pricing regulator.

The B.D. Athani sub-committee (“Sub-Committee”) set up by the Drugs Technical Advisory Board (“DTAB”)- India’s apex advisory body on technical matters relating to drugs- is in the final stages of drawing up a patient compensation plan for faulty medical devices (“Compensation Plan”).3 The Sub-Committee, set up in a DTAB meeting in November 2018 comprises ten persons including senior members of the All India Institute of Medical Sciences, Safdarjung Hospital, State Drugs Controller of Haryana and a representative from the Medical Technology Association of India, among others. The Sub-Committee is headed by B.D. Athani, the Directorate General of Health Services.4

The MDR 2017- the current regulatory framework governing medical devices in India- does not contain any compensation provision for harm caused to patients from faulty medical devices. As a result, compensation in such cases is determined on a case-to-case basis by either the regulatory authorities or the courts. The proposed compensation formula requires (i) the manufacturer/importer of medical device to provide medical management and (ii) compensation as per the New Drugs & Clinical Trial Rules 2019 to the person adversely affected by the medical device.5

The MDTAG consists of 22 members from different government departments, industry associations and prominent hospitals across the country. The MDTAG will meet with the Drugs Controller General of India (“DCGI”)- India’s apex drugs controller- once every four months and may co-opt persons from other fields as necessary.

All low-risk devices (Classes A & B) registered during the preceding 18 month period will be required to obtain licenses within the next 12 months. Registration is required for manufacture, import and marketing the medical device.

All high-risk devices (Classes C & D) registered during the preceding 18-month period will be required to obtain licenses within the next 24 months. Registration is required for manufacture, import and marketing the medical device.

The proposed definition of medical devices in the D&C Act includes all medical devices including a software or an accessory, intended by its manufacturer to be used specifically for human beings or animals which does not achieve the primary intended action in or on human body or animals by any pharmacological or immunological or metabolic means but which may assist in its intended function by:

Temporary exemption will be provided to the above medical devices notified under the above provision during the 18-month registration period.

The MD Committee also proposed creating a medical device vertical under the CDSCO to bring in additional manpower for regulating medical devices.

The medical device vertical will be created under DCGI and will be headed by an Additional Drugs Controller. 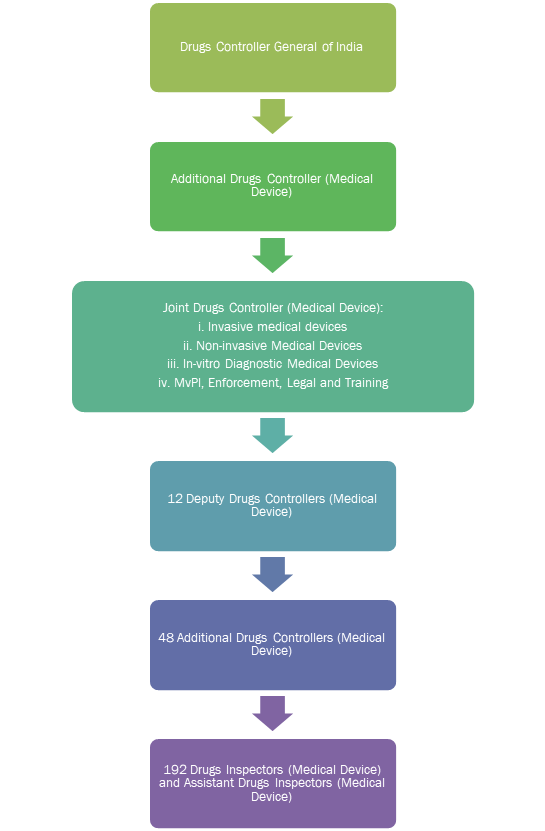 Industry insiders labelled the MD Committee report as a missed opportunity to regulate medical devices separately from drugs. The Medical Technology Association of India has opined that “medical devices are generically different from drugs and cannot be treated as drugs in the long run.” Medical devices require separate regulation for drugs due to the manner in which they are developed, marketed and deployed in a patient by a doctor.9

The regulatory future of medical devices in India was given a definitive direction when the MDR 2017 brought into force at the beginning of last year even though the implementation of the MDR 2017 was progressing at a sluggish pace.

With India’s drug regulatory authority releasing their roadmap for medical device regulation and notifying additional medical devices, it is clear that the Government fully intends to regulate all medical devices within the next two years. The question for the rest of 2019 and beyond is whether continuing to regulate medical devices under the same parent legislation as drugs is sustainable in the long run.

9 News article on ‘The road not taken: a missed chance for medical devices’, available at: https://www.thehindubusinessline.com/specials/pulse/the-road-not-taken-a-missed-chance-for-medical-devices/article26959008.ece (Accessed August 15, 2019).

SEBI Settlement Order – Research Analysts Not to Provide Model Portfolio Products
Regulatory Hotline: May 18,2022Effects of the pandemic on M&A - Episode 1
Audio : May 17,2022

Withdrawal of amount deposited in escrow account by buyer deductible from sale consideration
May 12,2022